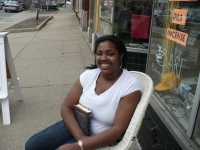 The Collinwood Observer wanted to talk to some our citizens (neighbors) and hear their thoughts about the new law.

Shakeela Liddell of Mannering Ave. says: "Everyone has a right to health insurance, how can we deny them? Those who feel different than this have not been in a difficult position, where they were unable to get or afford health insurance. I completely support the president on this issue."

Talking about the political courage it took for the President and other supporters in Congress: "I'm an educator, a 4th grade teacher, and I tell my students there are times when you need to stand up for what's right, and I think that is what the president has done."

Bill Gibson, of Blue Sky Bicycle on E185, wonders how the new legislation will affect him as a small business owner. "Small business is the backbone of our country. Health Care Insurance for all is a noble thought, a great idea.. hope springs eternal.. I just hope that it will work for the average guy.."

Mike Caruso of Tony's Barber shop says, "The president was not smart about this. He should have been focusing on creating jobs, that's  our greatest need."

Tom Griffin, of Shawnee Ave: "We need health care insurance, but I don't think this law was handled right: it just guarantees that insurance companies will get our business-- but we had to start somewhere."

Brent Staples of Lakeshore Blvd thinks costs are out of control: "I went in for a basic check-up recently, and the cost was ridiculous. I'm a veteran, but prefer to not use the VA," he says. "I agree with the bill, but think it needs to be cleaned up some, then it will be all right."