Worm Farm fights for its life 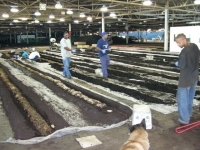 The Sansai Worm Farm is the dream of two brothers who started this business in their hometown of Cleveland, Ohio with the hopes of making Cleveland an example of how environmental and urban renewal can be accomplished at the same time. The dream was realized in 2005 with the purchase of a 32 acre property. The 17 acre facility, located in a converted inner city bombsite manufacturing factory, is also known as the former TRW Automotive Valve Plant in Collinwood. Now known as The Richard Melvin Building, the manufacturing facility has become the home to millions of red wiggler composting earthworms, who eat material, which othewise would go to landfills, for the harvest of worm castings which are premium organic plant additives. Sansai saves our planet from adding to dangerous methane levels produced at landfills. It also had plans to employ up to 400 people, from our neighborhood, in the next four years.

Right now Sansai has been told to move out, and the worms are in lock-down.

Though an Arizona corporation is currently in possession of the Worm Farm, their Attorney Charles A. Nemer, had promised the Melvin brothers that volunteers would be allowed into the building, to care for the livestock--the worms-- who need food and water, and do not belong to the out of state company, but to the Sansai Worm Farm.

Right now the Melvin brothers and Sansai Worm Farm are in negotiations to buy the building back. If Mr. Nemer does not follow through on his promise, by the time the legal wrangling is finished, and the Melvins are back in possession of their property, the livestock may be dead. To volunteer to help, contact the Worm Farm at www.sansaitech.com.


For more on this story, see Worm Farm, on Page Three.

Would you like to help the Sansai Worm Farm, or express an opinion about this situation?  Sign onto the COLLINWOOD OBSERVATION DECK.  Go the our homepage, www.collinwoodobserver.com, click on "Observeration Deck", and sign in.  This is a unique Message Board in that you must use your REAL NAME if you would like to participate.  The Deck is an extension of our community-written paper, in which we all take ownership for our words and ideas.  Think of the Deck as a back fence over which you are talking to your real neighbors, who you will see at the drugstore, and at church and at Wildwood over the summer, and be respectful.

Anyone can post a thread, instructions are on the website. Talk to your friends and neighbors in between papers, and if your topic is starting to seem like something that needs to be in the printed paper, we will probably be contacting you about writing an article, or just write one yourself, and send it in.  THANK YOU.  See you on the Deck.

Due to some unforeseen hurdles of starting up an environmental business in the city of Cleveland, the property’s 1st short term loan was due January 2006, just after the business finally received the green light to begin operations in December, 2005. When the real estate loan was refinanced, there was about a $2 million dollar penalty paid to the first out-of-state private lender by an associate lender, from the same state. This expense was passed on to the CEO of Sansai and due to the bad economy and the banking crisis, the delay of financing the 2nd short term, high interest loan has resulted in a challenging financial situation for Sansai. The building became owned by the-out-of-state lender and Sansai Environmental was told to move out, after a four year culmination of the manufacture of pure soil product that once sold retail can pay the lender in full, if unimpeded in its sale.

Earthworms have been labeled by soil scientists as earth angels. Every creature on this green Earth contributes something to the planet’s ecosystem, and one of those creatures is the earthworm. Now 60 million earth angels are in immediate jeopardy from suffocation and/or starvation!  Every day now, all but two or three of the volunteers wishing to help out have been turned away at the door. Why? Because of money and timing. But should live creatures suffer? With a large population of earth angels, it is critical to air out, water and feed hundreds of cubic yards of indoor earthworm habitats that are over 100 feet long by 6 feet wide. Thanks to Tim Smith and The Cleveland Greenhouse Project, there is a long list of volunteers who have signed up to help with offers of time and energy to take care of the livestock, but they aren’t always allowed in by the new out-of-state owner.

Sansai appreciates the help of the wonderful volunteers showing up to get to its valuable inhabitants for immediate care and feeding. Sansai’s earth angels have created tons of valuable earth angel product ready to sell to gardeners. Sansai hopes not to lose the home for 60 million earth angels due to greed. Saving this company will help save our home—Earth!

Sansai’s products Magic Dust and Magic Mist are the most economical and purest earthworm casting products in the world; free of chemicals and pesticides. Magic Dust and Magic Mist are part of the new revolution to reverse the damage to the Earth that chemicals have caused. Sansai Environmental Technologies www.sansaitech.com has reintroduced the magic of the earthworm to mankind on a large scale and applied the best of modern agricultural sciences and mass production processes to it, in order to be able to distribute it worldwide.

The earthworm eats organic decaying material, in effect helping to clean the environment.  Their bodies remove possible contaminants and convert the  organic material into nutrient-rich castings that feeds all vegetation with plant booster ingredients that assist plants to naturally grow healthier, stronger and larger.

Angels never arrive too late to help. Many have been in contact with Sansai to restructure its financing. Sixty million earthworms want to call Cleveland their home not their tombstone. The world's largest indoor earthworm casting production facility can survive, today, in this world, right in the heart of Cleveland, Ohio.


On the very near horizon, there is a solution. Sansai and The Cleveland Greenhouse Project are in the midst of a fundraiser for providing earth angels with new homes for those who vermicompost in schools, at home or the office. With teamwork, the communities in Cleveland can make a difference by showing others how to make it commonplace for earth’s inhabitants to use its food scraps for feeding earth angels who will then create the safest and purest of organic potting soil.

For those who have the spirit to add to the positive input of saving Sansai, PLEASE GET INVOLVED AND SIGN UP TO BE A VOLUNTEER THROUGH THE WEBSITE: www.sansaitech.com.

Maureen Browne is the Editor of Earthworm Digest.