A Love Letter to My City 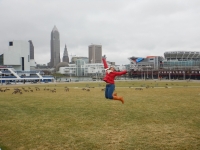 The author proving happiness in Cleveland is real.

This is a love letter to my city, your city, our city.

The hashtag began as a promotional campaign (think Positively Cleveland!) and spawned a population that truly does love Cleveland. And why not?

Last month I had the opportunity to chat about our city with a reporter out of Atlanta, Georgia. His former post in New York City had him crossing paths with a friend of a friend who became a Facebook friend whose Newsfeed constantly reminded her of the fact that I, Ali Lukacsy, love my adopted hometown on Lake Erie.

Cleveland, recently and suddenly shoved into the spotlight as a top travel destination, popped on the reporter’s radar and two degrees of separation later I was happily chatting off his ear.

I moved to Cleveland four year ago, in January 2011. Yes, in the dead of winter.  I quickly busied myself with the lay of the land after work and on weekends, digesting Scene’s “Top 10 Lists”, taking pottery classes, volunteering at the Cleveland Museum of Art.

Experiencing the city solo forced me to keep my ears and eyes open. The more I saw, the more I loved. But the stigma of Cleveland, a reputation that reached skeptical family and friends back home, was pervasive here and really, really perplexed me.

“WHY?!”, people would shout or laugh or heckle in disbelief. Oh, what a fall I must have taken to come to Cleveland. I was a three-headed monster each time I exclaimed that I WANTED to move here. I LIKE it here. I learned to reply “for the job” so as not to attract crazy stares, which of course was true but if it were only for the job I could have been anywhere.

It’s hard to pinpoint when the shift occurred. After a while I was no longer the “new girl”, although I may always be an anomaly since I didn’t flee and return - a trend amongst Clevelanders it seems.

The reporter asked about this shift in perception from Cleveland being a place where people are stuck to a destination for living, eating, shopping, playing, creating. It’s palpable.  Now, when I proudly state that I’ve been here for four years and counting the responses are positive reflections of the Cleveland, of me, of the thousands of other people who call this city our home.

In any community nothing is perfect. We’re experiencing growing pains, but no pain no gain, right?

It’s an incredibly exciting time to be part of a movement of truly engaged, celebratory people that no longer need a hashtag to self-affirm that we are happy here. But what the heck, let’s shout it from the roof tops anyway! #happyinCLE