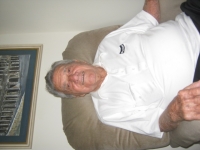 Rocco Scotti passed away on September 11 at the age of 95. He became renowned for singing his rendition of the national anthem for decades at Muncipal Statium Indian games.

Born Rocco Eli Michael Biscotti in Ambler Pennsylvania January 9, 1920. His parents, Nicholas and Madeline, were from Foggia, Italy, which is near the spur of the boot. They movef the family to Cleveland in 1923, first settling near Murray Hill on East 120th Street. In 1928 they moved to 18519 Arrowhead Avenue, just off East 185th Street. Here Rocco was raised with his nine siblings, first attending Oliver Hazard Perry Grade School then later Collinwood High School where he graduated in 1939.

I have a lot of good memories of driving up to the games in the 1960's and 1970's with the family from Salem outside Youngstown. Having a father who ate and breathe the Indains, having seen Babe Ruth play at League Park and pointing out as we drove down Carnegie Avenue the Tutor Arms Hotel, where Bob Feller lived when he played. I'll always associate you with part of those memories Rocco. So thanks.