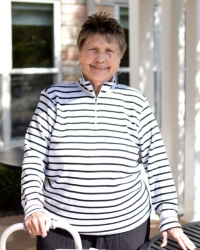 In February of 2014, Elfrieda “Fritzie” Holtcamp was an active and independent 85 year old woman.  When she began to experience back pain, she was told that she had a bladder infection.  It never occurred to her that this would lead to a life changing experience. Unfortunately, her pain continued to worsen and she soon found herself admitted to the hospital with sepsis and the loss of motor function in her legs.  An MRI quickly revealed that she had a large abscess on her lumbar spine, requiring immediate surgery.  After surgery, Fritzie was told that she would never walk again.  She then spent three weeks in an acute rehab facility to recover some of her most basic mobility.  When it was time to move out of this facility, it was obvious to Fritzie that she couldn’t go home.  She chose to move to Mount St. Joseph Rehab Center in Euclid, a place where she had spent many hours as a volunteer with their pet therapy program.  When Fritzie arrived at Mount St. Joseph, she couldn’t even move her toes, but she was thrilled to have the physical therapist tell her, “Stick with me, I’ll get you moving.”  With hard work, motivation, and many hours of physical therapy and occupational therapy, Fritzie did “get moving”.  After 14 months, she was not only walking and able to stand on one foot, but she was able to leave Mount St. Joseph Rehab and live independently once again.  She states, “The therapy at Mount St. Joseph is fantastic!”  She credits her returned independence to “determination, God and therapy”, and to the peace and care that she received at Mount St. Joseph Rehab Center.

Heidi Shenk has been a physical therapist for more than 23 years. She has just recently moved to the Cleveland area from Stockholm, Sweden and is now working as the Director of Marketing for Mount St. Joseph Rehab Center.