Mother Raphael as a Pioneer 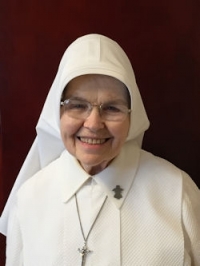 In late April of 2015, Mother Mary Raphael Gregg was awarded the Ohio Health Care Association Pioneer Award.  This award is designed to honor a commitment to excellence in long-term care services, and to recognize Ohioans who are influential in the development and advancement of long-term care programs.  Mother M. Raphael earned this award through her lifetime commitment and dedication to Euclid’s Mount St. Joseph Rehab Center on Chardon Road.  Mother Raphael became a Catholic Sister on October 3, 1954 when she joined the Sisters of St. Joseph of St. Mark.  At the time, the sisters were providing rest home services on a local estate that they had purchased.  Sister Raphael was sent to nursing school to better care for their residents.  She earned her LPN in 1958, her RN license in 1979, and then her BSN degree in 1992.  As Mount St. Joseph nursing home grew and changed with time, Sister Raphael became a licensed nursing home administrator in 1999, after completing an internship at St. Augustine Manor.  She would later become the Administrator of Mount St. Joseph and the Mother Superior of the Order.  In 2012, Mother Raphael managed every detail of the design and construction, and led the way as the sisters replaced their old nursing home with a new, state of the art rehabilitation center.  The new Mount St. Joseph Rehab Center will continue to provide excellent care long into the future due to Mother Raphael’s watchful eye and dedication to her mission.

Heidi Shenk has been a physical therapist for more than 23 years. She has just recently moved to the Cleveland area from Stockholm, Sweden and is now working as the Director of Marketing for Mount St. Joseph Rehab Center.