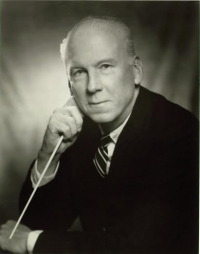 The music of Leroy Anderson, beloved composer of well-known favorites, will be featured in a Pops Concert tribute presented by Euclid Symphony Orchestra on May 1 at Shore Cultural Centre.

In the final concert of their 55th year, the Euclid Symphony Orchestra will present a Pops Concert tribute to Leroy Anderson.The concert, at 3 p.m. on Sunday, May 1 at the Shore Cultural Centre at 291 E. 222nd St. in Euclid, will showcase some of Anderson’s most popular tunes.  Anderson, one of the most prominent pops composers, introduced many of his works to the American public in performances by the Boston Pops Orchestra. Anderson served as an arranger for the famous Orchestra and specialized in fun, short and catchy musical arrangements.  The tribute to Anderson is fitting for a man who is one of the most well-known and beloved contemporary composers.

Anderson entered Harvard University in 1926, served as director of the Harvard University Band and earned a master’s degree in music in 1930, according to his official biography. He continued to study at Harvard after 1930, but shifted his focus towards a PhD in language studies, mastering Danish, Norwegian, Icelandic, German, French, Italian and Portuguese in addition to English and Swedish, the languages his Swedish immigrant parents had taught him at a young age, all the while continuing to serve as director of the University Band.  His work with the Band earned Anderson the attention of Arthur Fiedler, the Director of the Boston Pops, and he began composing music for the orchestra.

In 1942, Anderson joined the army, serving as a translator and interpreter in Iceland with the U.S. Army Counter Intelligence Corps. during WWII. He returned to the United States in 1943 and was assigned to the Pentagon where he served as Chief of Scandinavian Department of Military Intelligence. During his time there, in 1945, he composed “Promenade,” which will be featured at the Euclid Symphony’s Pops Concert May 1.  He later moved to New York, and continued to compose music for the Boston Pops. In May of 1948, “Sleigh Ride” was performed for the first time by the Boston Pops. It quickly become one of the most popular Christmas songs of all time. The song, featuring the clip-clop of hoofbeats and sleigh bells could be heard in New York Department Stores during the Christmas of 1948. The Euclid Symphony Orchestra regularly includes “Sleigh Ride” in their Christmas concerts.  After the “Sleigh Ride” hit, Anderson went on to compose “Blue Tango” and “Belle of the Ball,” both featured during the May concert.

At the concert, the Euclid Symphony will also perform “The Waltzing Cat” and “Forgotten Dreams.” Walzing Cat features many of the comical imitations of everyday sounds improvised using the instruments in a symphony that serve as the hallmark of many of Anderson’s most famous works like “The Syncopated Clock” and “The Typewriter.”  In addition to the Anderson favorites, the orchestra will also perform “Emperor Waltzes” a collection of four waltzes by Johann Strauss; “Waltz from Billy the Kid” by Aaron Copland and a collection of musical highlights from the musical “Annie.”

Tickets to the concert are $8 in advance and $10 at the door the day of the show. For more information, please visit www.euclidsymphonyorchestra.com.