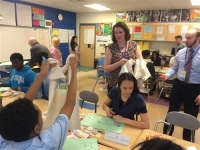 A mentoring program for Cleveland Metropolitan School District eighth-graders will double its reach to 46 schools this fall.

True2U, a collaborative effort involving the Cleveland Foundation, the District, the Greater Cleveland Partnership and the Neighborhood Leadership Institute, guides the students as they prepare for what can be a make-or-break transition to high school, post-secondary education or training and careers.
Collinwood-area chools that will be added include Memorial, Hannah Gibbons, Euclid Park, Iowa-Maple and Kenneth W. Clement Boys' Leadership Academy.  Oliver H. Perry and East Clark already participate.    After the expansion,  the program will be in more than half of CMSD’s K-8 schools. The remaining schools will be added during the 2017-18 academic year.

Each month, mentors from corporations and other segments of the community fan out for three hours to participating schools, helping students to envision their future and work on skills required to make that future a reality.

Much of the focus is on career and college readiness, said Shana Marbury, general counsel and vice president for the Greater Cleveland Partnership, a metropolitan area chamber of commerce.

“For GCP, that’s one of the biggest attractions of the program,” Marbury said as she and other mentors worked with students last month at the Douglas MacArthur Girls’ Leadership Academy on Valleyside Road. “It’s building a pipeline.”   Mentors have undergone training led by Stedman Graham, a leadership consultant and author, and follow a curriculum based on his book, “Teens Can Make It Happen, Nine Steps to Success.” They help the students assess and develop their decision-making skills, self-image, strengths and values.

At the beginning of the program, Brenda, a student at Douglas MacArthur, completed an assessment that showed she is introverted. The 13-year-old has resolved to challenge herself to be more outgoing

Mentors have helped the children research and choose their high schools. As a “portfolio district,” CMSD permits students to select from an array of options to find the best fit.

Brenda plans to attend Bard High School Early College because she believes that will be the best place to capitalize on her passion for writing. She hopes someday to write fantasy fiction like the Harry Potter series that she calls her obsession.

“My main goal is to be a lawyer,” said Brenda, who leans toward specializing in business and corporate law. “I’d like to be an author on the side.”

Teacher Veronica Wessell welcomes the mentors’ presence and says they fill a void at Douglas MacArthur.

“It provides the students with more resources,” she said. “We don’t have full-time guidance counselors. It’s hard for me as a teacher to go away from the curriculum and teach those things.”

Five mentors from fields like banking and architecture work with teacher David Slutzky’s students at Paul L. Dunbar on West 29th Street. He said the mentoring has prompted the children to consider what they want to do in life and “opens their eyes to things they didn’t know were options.”

Indya, 14, knew she wanted to be a neurologist but had no idea where to attend high school until exploring her options through True2U.

She settled on her neighborhood school, Lincoln-West, where a new small school, centered on science and health, will begin sharing the building this summer. The MetroHealth System has signed on as the school’s partner.

“Before they (the mentors) came, I wasn’t sure what to do, where to go,” Indya said. “They helped me step by step."
Rosanne Rosenberger, treasury products manager for KeyBank, was impressed that many Dunbar eighth-graders already had a strong sense of their future direction. But she took delight in helping them get a clearer view.

“I really enjoy the “Aha” moments the kids get,” said Rosenberger, who formerly worked as a special-education aide for the Strongsville schools.

True2U supplied 180 mentors this year. The program must increase that number to about 400 this year, said Kasey Morgan, a program officer for the Cleveland Foundation.

The Neighborhood Leadership Institute is in charge of recruiting the mentors. For more information, call 216-812-8700.

Thomas Ott is director of the CMSD News Bureau