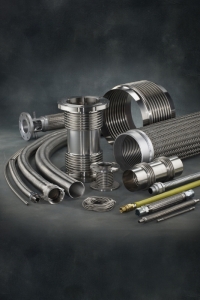 Can you guess what Hose Master makes? Yup. Hose! But not of the garden variety. Hose Master manufactures ¼-inch to 20-inch-in-diameter metal hoses with expansion joints to transport liquids and gasses for industrial applications where rubber hose won’t work because the environment is too hot (think, steel mill), too cold, or where there is a concern that something could permeate the hose (think, chemical plants and refineries), such as in the transport of chlorine. As consumers, we have encountered their hoses in three places: the metal hose that connected the receiver to the box in a pay-phone booth in the good old days, the hose on a handheld showerhead and the hose that we can’t see beneath the dispenser at a gas station, which pumps the gas up from the underground tank.

The company got its start 34 years ago when Sam Foti, Sr., who ran a small hose company, sent his son Sammy to college for a bachelor’s degree in mechanical engineering at The University of Michigan, said “Let’s start a company,” and used the family’s savings to buy tool room equipment. Hose Master was born in a 17,000-square-foot building in Euclid, Ohio, then expanded to its current quarter-mile-long headquarters at 1233 E. 222nd Street because, according to Sammy, his dad “got a great price on the facility, and the City of Euclid was great to work with.”

Sammy says, “My father is a tool and die maker with a knack for building machines. He’s not educated as an engineer but is the best engineer I’ve known.” Sammy went on to get his M.B.A. at Case Western Reserve University and spends 80 percent of his work day doing research and development. Not only do Hose Master’s engineers design products, but they design and build the equipment to make the products, and they train machinists and welders to fabricate them. Sammy’s sister and brother manage marketing and legal activities, respectively, for the company. Sam and Sammy both work on the shop floor side by side with their employees, which include 400 people in four locations (Cleveland, Atlanta, Houston, Reno).

The Fotis have a vested interest in the state of U.S. manufacturing. Sammy says, “When I think altruistically, I want to help the U.S. develop more engineers and a manufacturing base. I am distressed at the movement toward a service orientation and away from manufacturing. Manufacturing is stressed and challenged, with the exception of the automotive industry. This is deteriorating the foundation and base of our economy. Manufacturing is the base that feeds everything. Although the field of engineering has become more popular, which I am happy to see, we aren’t doing a good job of developing people for other skilled positions, especially machinists and welders. Because of this, Hose Master has had to invent ways to develop a skilled workforce.”

The company has created a manufacturing apprenticeship program. Since it can’t find and hire enough skilled machinists, it train its own, and it hires in general labor employees then gauges who might want to learn welding. He advises, “To have adequate staffing, we must commit ourselves to training. We can’t be casual about developing future generations to replace the aging-out workforce. And, we need to keep production domestic rather than sourcing overseas products.” Because of this investment in building the manufacturing workforce, Hose Master was recognized with a 2016 Evolution of Manufacturing Award by Smart Business Magazine.