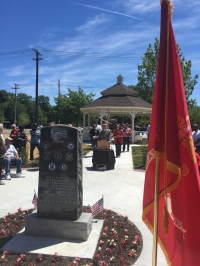 On Sunday, June 12th 2016, Northeast Ohio was uncharacteristically sunny as Collinwood dedicated its first veteran's memorial at Veterans Park at the intersection of Lakeshore Blvd and Nottingham Rd to honor those who have fought for our freedoms. The marble monument, donated by Nagy Monuments on Waterloo Road, captures the emblems of the five divisions of the Armed Forces with stunning detail.

Since the founding of Collinwood, many men and women from this neighborhood responded to the call of duty to serve in the Armed Forces in both times of war and peace. Many of them came out for the ceremony. Councilman Polensek chose to commemorate those who served on this particular Sunday as it was leading up to Flag Day, June 14th commemorating the adoption of the flag in 1777.

The Collinwood-Nottingham Historical Society is collecting the stories of all those from the neighborhood who served. If you served, your history is important. The group would like to preserve those stories. Submit your story to Mary Louise Jesek Daley at mdaley@clevelandcitycouncil.org  or 216-664-4236.