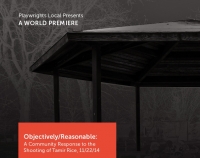 Documentary play captures community response to the shooting of Tamir Rice in Cleveland in November 2014. Features contributions from six playwrights and direction by Terrence Spivey. Runs August 18 through September 4 at Waterloo Arts.

Playwrights Local announces the world premiere of “Objectively/Reasonable: A Community Response to the Shooting of Tamir Rice, 11/22/14.” Directed by Terrence Spivey, this documentary play addresses the impact and aftermath of the Tamir Rice shooting, expressing unheard voices from the Cudell neighborhood and Greater Cleveland. Created by an ensemble of playwrights, “Objectively/Reasonable” is a collage of original monologues based on interviews with legal experts, social critics, and everyday people. The production runs August 18 through September 4 at the Creative Space at Waterloo Arts.

Playwrights contributing to this project include Mike Geither, Tom Hayes, Lisa Langford, Michael Oatman, David Todd, and Mary E. Weems, Ph.D. Conception and arrangement was provided by Todd, the artistic director of Playwrights Local. “We wanted to address this issue in a way that felt appropriate and respectful,” Todd said. “We tried to represent the perspectives of people who were still struggling with this case and with the issues underlying it.” Langford emphasizes the importance of providing an outlet for speakers who were being ignored, saying, “People want to talk about what happened; they just don’t always know how. At the very least, the people I interviewed got to speak their minds.”

“Objectively/Reasonable” features direction by Terrence Spivey, well-known to Cleveland audiences from his tenure as artistic director of Karamu House. Spivey describes his approach to the play as a “stylized mix of agitprop movement and multimedia woven between the written monologues about Tamir.” For Spivey, the appeal of working on the play stemmed from “the angle from which the dialogue is coming—from the community.” He notes that “in addition to creating fictional characters, it is our job [as theater artists] to reflect the just and unjust in the real world as they did back in the days of Clifford Odets and LeRoi Jones. In other words, we should be the voice of the people.”

The cast of “Objectively/Reasonable” includes local veterans Ashley Aquilla, India Burton, Ananias Dixon, JamekaTerri, Lashawn Little, Brenton Lyles, and Nathan Tolliver. Joining them are two young actors, Kali Hatten and Samone Cummings; for the ten-year-old Cummings, the production marks her professional debut. “This topic was a pressing one for all of the playwrights,” Todd said. “As we got into the production process, we realized it was equally important to the actors, designers, and staff. We’ve been amazed by the conviction and sense of risk-taking that everyone has brought to the table.”

“Plays like this are truly important,” said Cleveland-area activist Basheer Jones. “I think that a creative way to talk about a very serious topic can bring about change. When people of all races and cultures come together and say, ‘We need to address this injustice’, then we can come up with the solutions.”

“Objectively/Reasonable” runs August 18 through September 4, with shows Thursday through Saturday at 7:30 pm & Sunday at 2:30 pm. All performances are at the Creative Space at Waterloo Arts (397 E. 156th Street, Cleveland, OH 44110). Tickets are $15 for adults, $12 for seniors, and $10 for students. Group packages are available. For more information, visit the company’s website at http://playwrightslocal.org/.

Playwrights Local is a theater company based in Cleveland. Billed as a playwrights’ center, the organization’s goal is to provide a home for dramatic writing in Northeast Ohio. They offer classes and workshops, produce original plays, provide professional development opportunities, and engage the community through site-specific projects. Tax-deductible contributions to this 501(c)(3) group can be made athttp://playwrightslocal.org/donate/.