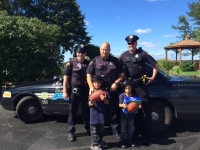 It took a major team effort and some special surprises from the Cleveland Police Department  to make the birthday party of seven-year-old Joey extra special on September 11 at David Simpson Hospice House.

Volunteer service manager Lori Scotese manages Hospice of the Western Reserve’s Moments to Remember program, which focuses on enriching the lives of patients and their families by creating special memories for them. Joey’s mom, Lisa, was receiving care at David Simpson Hospice House, so Scotese was working with the family to plan a special birthday celebration for Joey there.

After being asked what superhero he wanted on top of his birthday cake, Joey replied: “A police officer.” Hospice team members took that cue and went to work. They contacted Cleveland Police Department’s Fifth District Officers and invited them to attend a birthday party to surprise Joey and his mom.

Much to the family’s surprise and delight, on September 11, a parade of six Cleveland Police cars and officers arrived with lights flashing and announced over their loud speakers: “Happy Birthday, Joey!” The little boy was all smiles. Fifth District Officer Todd Kilbane brought junior police badges, a police shirt and coloring books, and Sergeants Tim Gill and Dave Skrletts passed the word along to their fellow officers. Police Officers Gary Stiegelmeyer, Mike Maliszweski, Sean Coleman, Eric Hageman, Addonna Perez and Sergeants Lisa Steel, Dan Crisman and Tim Gill visited with the family, delivered bags full of gifts for Joey and were even thoughtful enough to include gifts for his younger brother, Michael.

The playroom at David Simpson Hospice House was transformed into a blue police officer-themed birthday party celebration for Joey. Hospice of the Western Reserve’s pediatric team secured a new bike and helmet for Joey and were able to purchase a bike and helmet for Michael, too, using donated gift cards.

Joey rode his new bike around the parking lot, proudly sporting his new police shirt and junior officer badge. As the patrol cars left, he ended the afternoon with blue frosting and a big smile on his face.