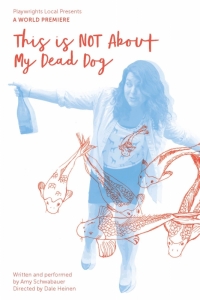 Playwrights Local announces “This is NOT About My Dead Dog,” a new one-person show written and performed by Cleveland-based playwright and actor Amy Schwabauer. Featuring direction by Dale Heinen, this world premiere provides a tragicomic look at a young woman finding herself in the midst of a chaotic transition into adulthood. The production runs January 13 through 28 at the Creative Space at Waterloo Arts.

“This is NOT About My Dead Dog” combines reflections on love, sex, and alcohol with loud-out-loud stories from an awkward girlhood. Tackling German shepherds, boyfriends, and other attachments, playwright/performer Amy Schwabauer takes the audience through her journey from lonely child to young partier to (relatively) well-adjusted adult. This comedic one-woman show is part pain journal and part offbeat rumination on aquatic life. It is heartbreaking, but always bracingly honest and funny.

“Our company is looking to spotlight new local talent, and Amy Schwabauer fits the bill on multiple fronts,” says David Todd, Artistic Director of Playwrights Local. “This play is a brave look at her own life, one that digs deep and challenges Amy as a writer and performer. In addition to all of her comic charms, Amy has found another gear for being moving and profound with this show. We’re happy to produce such an engaging new dramatist.”

“This is NOT About My Dead Dog” was developed in Playwrights Local’s inaugural Play Lab new-work incubator in 2016, with initial dramaturgy by Arwen Mitchell and production dramaturgy by Dale Heinen. The goal of this annual Play Lab program is to usher works-in-progress from the early draft phase to being performance-ready. “New plays are imperfect creations that can be altered indefinitely,” notes Heinen. “Playwrights Local is committed to the process of actually producing promising new work, preventing it from getting stuck for too long on the treadmill of development.”

Amy Schwabauer’s writing credits include Fluff Pup (Cleveland Playwrights Festival), The Bird Behind the Curtain (Cleveland State University), and The Accounts of the Warren County Fair as Observed by a Young Astronaut, a “tabletop” play with Mike Geither that is currently on tour. As a performer, she has recently appeared in Positive Reinforcements (Theater Ninjas), Snake Oil (Ohio City Theatre Project), and Left in Ink (Cleveland Public Theatre). Director Dale Heinen has been recognized by the Jeff Awards in Chicago and has received the Arches Award for Directors in Glasgow. She has directed thirty professional productions in additional cities such as London and New York, and has developed new plays at Soho Theatre (London), Silk Road Rising (Chicago), Cleveland Public Theatre, and Chicago Dramatists.

The stage manager for “This is NOT About My Dead Dog” is Nicola Patton, and the production manager is Francesca Mamlin. The creative team consists of lighting designer Stephanie Kahn, set designer Elaine Hullihen, and sound designer James Kosmatka. The assistant director is Nora DeMilta.

"My goal for this production is to help Amy Schwabauer give powerful expression to her story and her voice, and to give audiences access to her rich, colorful language and personality,” Heinen says. “Amy wrestles with growing up female and Catholic, and with grief, alcoholism, and the demons of self-destruction. This play is about not being a waste of space, and the perfect love of dogs.”

Playwrights Local is a theater company based in Cleveland. Billed as a playwrights’ center, the organization’s goal is to provide a home for dramatic writing in Northeast Ohio. They offer classes and workshops, produce original plays, provide networking opportunities, and engage the community through outreach projects. Tax-deductible contributions to this 501(c)(3) group can be made athttp://playwrightslocal.org/donate/.