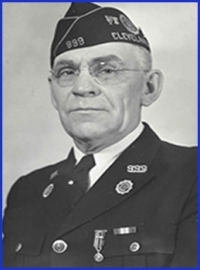 It is with great pleasure we announce the induction of two alumni to Collinwood High School’s Hall of Fame. The Hall of Fame formally recognizes those alumni who have professionally distinguished themselves, thus bringing honor to the school. Peter Paul Ducosky was a true patriot and was the driving force behind the development of the Collinwood Train, the 999. John Sercel had a distinguished career with the USAF and was one of the most decorated pilots during the Vietnam War

Peter P. Ducosky was the first born son of Polish immigrant farmers, in Pennsylvania, in 1892.  He served our country in the Merchant Marines and in the US Army.  After he married, Peter and his beloved wife Stella, moved to Cleveland, Ohio where he began a 32 year career as a pipefitter with the New York Central Railroad in the Collinwood Yards.  Peter was one of the founders, and first Charter Member, of the American Legion Post 999 located on East 152nd Street.  Peter, and his wife, were active members of the American Legion throughout their lives.  Post 999 was proud of its support of our troops during WWII, and subsequently, support for European children after the war.  Under Peter’s leadership, Post 999 surpassed all others in northeastern Ohio for the collection of records for troops, and in the early 50’s, toys for the nationwide American Legion “Tide of Toys” drive.

In 1932, Peter, and four others with Post 999 and New York Central Railroad, built the 999 replica locomotive that the Collinwood Alumni Association has resurrected as a visible reminder of the historical spirit of the Collinwood High School “Railroaders”.  The original “999” is historically significant as the first engine to have exceeded 100 miles per hour; it was also known as the “Queen of Speed” and pulled the Empire Express, New York Central’s flagship passenger train.  The Legion’s “999” was constructed after hours at the Collinwood Yards.  This miniature locomotive served Collinwood well – not only for the American Legion, but also as good advertisement for the New York Central Railroad.  The “999” appeared in many parades in Cleveland, and across the country.  The fact that the “999” is in our service today, is a testament to the excellence of its construction, as led by Peter. In the 1940’s Peter oversaw construction of an even larger engine for the Forty and Eight.  The fate of this larger engine is unknown.

Peter was also a member and leader of the local Forty and Eight Chapter, Voiture 11, a charitable honor organization of US Veterans.  The Forty and Eight’s purpose is to uphold and defend the United States Constitution to promote the wellbeing of veterans and their widows and orphans, and to actively participate in selected charitable endeavors including programs to promote child welfare and nurses training.  These were all worthwhile activities that Peter participated in to the benefit of his community.

John Sercel, Major USAF, graduated from Collinwood High School in 1950.  Following graduation John initially enlisted the Navy.  In 1952, he switched to the Air Force.  He was accepted to the USAF Aviation Cadet program, completed that training and became a 2nd Lieutenant.  Following graduation from the Air Force’s Undergraduate Pilot Training (UPT) program, 2Lt Sercel became an F-86 fighter pilot and was a assigned to Landstuhl Air Base in Germany. Lt Sercel flew missions in Europe as part of the US commitment to the fledgling North Atlantic Treaty Organization, supporting such activities as the US response to the Hungarian Missile Crisis.  Many other tours of duty took Sercel around the globe, as he proudly served his country in Germany, Japan, Viet Nam Korea and The United States.  Major Sercel really distinguished himself with his actions in the Viet Nam war.

Major Sercel was a Super Saber (F-100F) pilot in the 415th Tactical Fighter Squadron during the Viet Nam war.  He flew more than 120 combat missions in three tours of duty.  As an F-100F pilot, Major Sercel flew missions into North Vietnam escorting aircraft involved in the Rolling Thunder operations.  His task, to suppress enemy air defenses, both airborne and ground based, is still considered today as one of the most dangerous missions in that war.  Major Sercel was also involved in more than 30 missions as a forward Air controller.  In these operations, he flew as an advisor to Republic of Vietnam Forces in battles such as the Ia Drang valley. (‘We Were Soldiers’) where he also supported US Special Forces in those battles.  Major Sercel was one of Cleveland’s most decorated pilots in the Viet Nam war.

A few of his prestigious Medals are:

Winston Churchill’s grandson, Sir Spencer Churchill, was a British War Correspondent, who was reporting on the war for both British and US publications.  He wrote several articles about the Viet Nam war for LOOK magazine.  When the USAF offered to provide Churchill with a bird’s eye view of the air war, he was lucky to fly with Major Sercel on a combat mission.  Churchill in his article, portrayed Sercel as “the brawny, jovial-faced Major from Cleveland, Ohio” in an issue of LOOK magazine.  He was one of a great many people that were impressed with the way Major Sercel conducted himself in the service of his country.  Major Sercel was also a combat leader.  As a flight commander, he was a leader and a teacher to many young fighter pilots coming into the service.  In particular, to officers who were then graduating from the first class of the then new USAF Academy.  Many of these young officers would later become senior level leaders in the USAF and credit their success to John’s style of leadership by example.

Major Sercel retired from the Air Force after 20 years of distinguished service.  Prior to his retirement, he served as an F-100 Super Saber fighter-bomber academic instructor, as operations officer for the 416th Tactical Fighter Training Squadron; part of the 58th Tactical Training Wing at Luke Air Base in Arizona. He continued to fly after the Air Force as the Chief Pilot for Cessna Corporation’s East Coast Jet Marketing Division.  In that capacity, he led his company’s efforts in aircraft flight demonstration and sales of Cessna Citation Business Jets all over the world.

This will be a posthumous reward because John was deceased at the young age of 45 in a tragic 1977 traffic accident.  Major Sercel was a proud family man with who left a widow and five sons.  His legacy lives on with his granddaughter Kimberly who became an AF pilot following a service academy education.  Kimberly attended joint Navy-AF pilot training at Pensacola NAS and now flies as an instructor pilot, in the Lockheed Martin C-130J.  Like her grandfather, she also has 3 combat tours of duty to her credit, with missions into Afghanistan and other parts of Southwest Asia.  She credits her desire to serve her nation, from stories growing up that she heard of her grandfather’s exploits and heroism.

Many CHS graduates remember those turbulent times as the United States struggled with the war in Viet Nam.  We are proud to call Major John Sercel a fellow CHS classmate. John Sercel graduated from Collinwood High School in 1950.  Following graduation John initially joined the Navy.  In 1952 he enlisted in the Air Force Flight School where he was commissioned.  John proudly served his country in Germany, Japan, Viet Nam and The United States.  Major Sercel really distinguished himself with his actions in the Viet Nam war.

Many CHS graduates remember those turbulent times as the United States struggled with the war in Viet Nam.  We are proud to call Major John Sercel a fellow CHS classmate. John Sercel graduated from Collinwood High School in 1950.  Following graduation John initially joined the Navy.  In 1952 he enlisted in the Air Force Flight School where he was commissioned.  John proudly served his country in Germany, Japan, Viet Nam and The United States.  Major Sercel truly distinguished himself with his actions in the Viet Nam war.

The formal inductions will take place on Saturday morning September 16th, 2017 as part of the Grand Reunion IV which brings together alumni from all graduating classes. Everyone is welcome. For more information on the ceremony and Grand Reunion, visit the alumni website at www.collinwoodalumni.com.