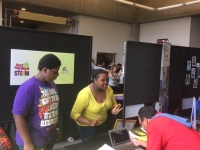 Students Marcus Bell and Kristiana Johnson presenting the "Straight Outta the Milky Way" project to guests at the STEAM Showcase.

On Saturday, May 20, 2017 my students at New Tech at Collinwood High School lit up 2 major museums with their greatest hits from "Straight Outta the Milky Way" at CMSD's "Rock Your World with STEAM" Festival!  In January, my 9th grade physical science students wrote lyrics to songs about the universe.  These lyrics were aligned to the Ohio physical science indicators: the history of the universe, galaxy formation and stars.  Once their lyric drafts were written with scientific accuracy, students collaborated with DJ Phatty Banks and Reading RAMM to tweak and perfect their lyrics. They then recorded their songs on top of beats made by Khalil Barrett, a senior at CHS and released their music to the public at our launch party in February at the Cleveland Museum of Natural History.  In the New Tech Network, we teach all of our content through project-base3d learning (PBL), but this is the only project that left me with bittersweet feelings in the end (normally, its relief and a little reflection for next year).  Since the launch party, students have revisited the experience in conversations, desires to perform again, and in helping them remember information.  Our scholars have not only remembered the lyrics to their own songs, but to each others' songs as well!

The project was technically over in February according to my grade book, but it wasn't over in the hearts of many students or myself.  As fate would have it, we were asked by Maria Carlson, our principal to represent Collinwood at the STEAM Festival.  We participated as both performers and presenters of our project itself.  A select group was chosen to perform a mash-up of our greatest hits and they voluntarily attended practices after school to prepare.  Their hard work paid off, because in front of the Rock and Roll Hall of Fame, strangers milly rocked to hip hop songs dropping technical knowledge on the cosmos!  Before the performance, two other students presented our project in the STEAM Showcase at the Great Lakes Science Center.  We were thrilled when we were notified that we won the Best in STEAM School Showcase Award for High School!

I am so proud of my students for all of their hard work and dedication to this project over the semester.  Shy students performed, lower achieving students took ownership of content, insecure students grew confidence and students generally took pride in a job well done.  Initially, I thought I may have overdone it this year because their exit ticket (daily quiz) data was worse than it was when I ran this project last year.  But when it came to their final exam, they performed BEST in the universe benchmark. We saw, we dropped bars, we retained and mastered!


You can listen to our music on Soundcloud: https://soundcloud.com/math-in-motion/sets/straight-outta-the-milky-way

Here is a video of their performance at the STEAM festival: https://youtu.be/sR-VTGAsCFI

Dean Bryson is a resident of Collinwood and teaches 9th grade physical science at New Tech at Collinwood High School.