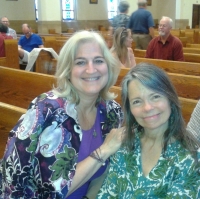 Concert goers Michele Biondo and Judge Suzan Sweeney relished the oportunity to hear live music performed by the composer right in our own neighborhood.

In celebration of their third wedding anniversary, Lawrence and Julia Wallace gave the people of Cleveland a gift in the form of an original concert.  The music was written and sung by Julia with Lawrence accompanying on piano.  Julia drew inspiration from the poetry of Charles Simic.  Jordan Dryer, Julia’s brother who read each poem before they were sung, actually started this project when he gave her Simic’s book “The World Doesn’t End.”  Julia was inspired to put the poems to music and met Lawrence when she needed an accompanist to record selections of the project.  The two have been inseparable ever since.  We hope they will continue to grace St. Jerome with their musical abilities for many years to come.