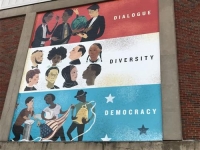 The City Club of Cleveland commissioned this mural, which was installed Oct. 24 and 25 on the side of the parking garage at New Tech Collinwood High School.

A mural installed Oct. 24 and 25 on the side of the deck facing St. Clair Avenue is one of three displayed publicly in Cleveland to spark reflection on the role of free speech in the city.

The City Club of Cleveland, a forum for free speech, commissioned the works last year to celebrate the 75th anniversary of its "Freedom of Speech" mural by Cleveland artist Elmer Brown. The installation at New Tech Collinwood came during Free Speech Week.

Christopher Darling, who died in June, created the Collinwood mural, using three tableaux to represent what he considered to be the underpinnings of the City Club’s mission: dialogue, diversity and democracy. Darling was a painter and illustrator whose works have been published and exhibited internationally. At the time of his death, he was teaching at Kent State University's School of Visual Communication Design.

The other murals were installed in August at the Bonfoey Gallery at Euclid Avenue and East 17th Street, by Playhouse Square, and this week at the Cleveland Public Library's Rice Branch on Shaker Boulevard.