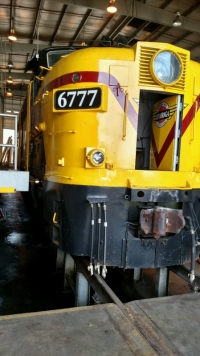 Thanks to HGR Industrial Surplus’ Customer and Cuyahoga Valley Scenic Railroad (CVSR)’s former Safety Manager and Current Volunteer Tony Caruso, I had the chance to tour the CVSR’s railyard and learn some important historical information about the railroad. What a treat, especially because HGR’s site has ties to the Nickel Plate Road, and so does Tony.

HGR’s building used to be home to the General Motors’ Fisher Auto Body Plant. The Nickel Plate Road Railroad came into the building to pick up auto bodies en route to Detroit for assembly. The entire building, including tenant spaces, was renamed Nickel Plate Junction in 2014 to honor the site’s history. Tony’s father, uncles, cousins and brothers all worked on Nickel Plate Road in Girard, Penn., and in Conneaut, Ohio, and Tony has a caboose in his backyard on actual track that was painted this summer in the colors of Nickel Plate Road.

CVSR is a nonprofit organization; while it partners with the National Parks, it is not owned or funded by the federal government. The organization is run by a handful of employees and many, many volunteers. How many? This is hard to believe, but in 2017 alone 1,866 volunteers logged a record 104,246 volunteer hours! Since 1999, CVSR has benefitted from more than 1 million volunteer hours.

The railroad opened in the 1880s to transport commercial freight and passengers between Cleveland, Akron, Canton and points beyond, but became a fully passenger railroad in the 1970s. In the 1990s, the park built a repair shop at the railyard so that employees did not need to take the trains to Cleveland for repairs. CVSR has six, 12-cylinder engines that can move at speeds of up to 30 mph. The railroad operates at 29 mph to stay within regulations for passenger trains. The trains hold 1,200 gallons of diesel fuel, 700 gallons of oil and 400 gallons of water, including that for the dining car, restrooms and the water/antifreeze mix for the engines. The train’s electricity is powered with a generator.

The cars were built in the 1940s to 1960s in The United States by The Budd Company out of welded stainless steel. This company also makes space shuttle bodies. Tony shared that the manufacturing standards by which rail cars and rail line are made date back 1,000 years. In the Roman days, carriages created a rut or groove in the road from the wheels. The distance between them was 4 feet, 8 inches. That is the exact distance between the inside of the rails. Even space shuttle booster rockets are designed with those measurements in mind in order to fit on a railcar for transport.

Lisa Sadeghian, CVSR manager of donor experiences, says, “The train is a moving museum that preserves the past while being educational and relaxing. We will soon begin working with two Northeast Ohio museums to create a rolling children’s museum with permanent and temporary exhibits on one of our train cars. In addition, passengers can rent a bike for a nominal fee and get on and off the train. So can hikers.” With a music education background, she goes on to share that Gershwin’s “Rhapsody in Blue” was written on a train, and that in parts of the song you can hear sounds of city life, as well as the rhythm of the train’s wheels and tracks.