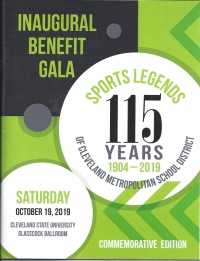 On Saturday, October 19, 2019, the Cleveland Metropolitan School District (CMSD) held its Inaugural Sports Legends Hall of Fame Gala at Cleveland State University Glasscock Family Ballroom. The Gala, with more than 350 in attendance, kicked off with a social hour against the back drop of sports memorabilia displays presented by the various school’s Alumni Associations. Followed by dinner, key note speaker and finally the Legends Induction ceremony.

The key note speaker was John Henry Johnson Jr., son of NFL Hall of Fame running back, attended West Tech and Benedictine High Schools. John coached track & field from USC, UCLA, and most recently as the coach for the Marine Wounded Warriors. The theme of his speech was to achieve success, you must be sincere, compassionate and disciplined in your efforts. John commented, “….you do what you do best and do it to the hilt.”

To qualify as a Sports Legend, you have to have an affiliation as a CMSD high school graduate, coach, staff, athletic director or administrator and were part of a team/individual championship/runner-up at the Senate, District, Regional, State, Collegiate, Professional or International level. This criteria was used to select more than 4,000 individuals spanning the past 115 years. At the Gala 45 Legends were honored by induction which included former Olympian greats Jesse Owens, Harrison Dilliard and Stella Walsh.

Lou Slapnick coached the Collinwood girls track team from 1994 thru 2010 amassing seventeen City of Cleveland championships in seventeen years of coaching at Collinwood, along with nine state championships. He was more focused on the development of the Lady Railroader’s character and life skills than just athletic performance.

Theo won the 100 yard dash, was second in both the low and high hurdles and placed third in the broad jump. His outstanding performance at the state track championship earned him the most valuable Class AA athlete of the meet award. His performance ranked with such greats Jesse Owens, Glenn Davis and Dave Mills. Theo is a veteran, Collinwood Hall of Fame member and is now an ordained minister.

Mike capped the scoring with a victory in the shot put, winning the event on his last throw after two fouls which were close to the state record. He continued his career at Ohio State University setting several records, earned eight letters and captained the track team his senior year. Mike, now retired, was an entrepenurial businessman, Colliwood Hall of Fame member, still competes Nationally in the Senior Olympics and  currently is President of the Collinwood Alumni Association.

As for the Dynmaic Duo today, Theo and Mike have remained friends through the years with Theo officiating over Mike and Wendy’s marriege in 2003 with Mike often referred to by Theo as his youngest daughter’s God Father!

Inductions will be held every two years, so keep tuned for potentially more CHS athletes being inducted in 2021.