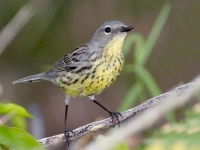 Hello -  I am a teacher at East Clark Elementary School on E. 146th St. I wanted to tell you about a club I lead at East Clark - The East Clark Bird Nerds. It is a group of 20ish 6th-8th graders at the school who are studying the birds of the Cleveland area. We meet every Tuesday after school from 2:30-3:30 where we study the various birds that live in and pass through Cleveland. This is the second year of The East Clark Bird Nerds - last year we won a grant that allowed us to do an awesome one day field trip to Magee March, in Curdice, Ohio during The Biggest Week in American Birding to attempt a "big Day" - a quest to see as many species of birds as you can in a day. 15 Bird Nerds loaded up in a small tour bus at 4:30 AM on May 3rd and returned that evening at 9:30 pm. Along the way we stopped in Lorain for breakfast, birded the Magee Marsh Boardwalk, at pizza and "lifer pie" at Blackberry Corners (a must-stop and eat place for birders during The Biggest Week), toured the newly opened Howard Marsh and took the Auto Tour at Ottawa National Wildlife Reserve, returned to the Magee Boardwalk - totaling an impressive 89 species of birds (including a rare Kirtland's Warbler)!  On the ride home we celebrated by eating far too much at Golden Corral in Elyria. We had a FABULOUS time! Exhausting - but AWESOME! We had help along the way - The GPD Employees Foundation awarded us $2000 for team shirts, transportation and the meals.  The Nerds were ALL loaned binoculars from Swarovski Optiks (the makers of the best binoculars on Earth).   In a week a world-famous birder, David Lindo - The Urban Birder, will be coming to Cleveland and The East Clark Bird Nerds will be participating in 3 different events with him. First they will attend a talk, Meet & Greet, book signing on Saturday, November 2nd. While there The Nerds will give brief presentations about their favorite birds. The next morning The Bird Nerds will go birding with Mr. Lindo and the general public in the area around downtown Cleveland looking to see some interesting urban birds. Finally, Mr. Lindo will spend an entire morning with The Nerds as he is coming to the school and going on a intimate birding day with him - just Mr. Lindo and the Nerds. Afterwards, Mr. Lindo will go back to school to eat lunch with them and give a talk to several middle schoolers.
I will attach a few videos and a bio about him.   Rich Banish Teacher/Bird Nerd - East Clark Elementary School   https://www.wcaudubon.org/urban-birding-with-david-lindo-2019.html   https://www.youtube.com/watch?v=epanrEIYoQ0
The Art of Finding Birds. With David Lindo - the Urban Birder. "There is a lot of activity right above our heads. Birds are everywhere in urban areas, even in places where you least expect them. Just get into the habit of checking along the edges and the tops of building." www.youtube.com https://www.youtube.com/watch?v=Kau9bKPQRlI
David Lindo - The Art of Urban Birding Urban Birder David Lindo explains the art of urban birding: "It's about a mindset. It's opening your mind to the idea that birds are everywhere, even in the middle of a concrete jungle." www.youtube.com David Lindo is Vice-President of the Wildfowl & Wetlands Trust and voted 7th most influential person in Wildlife by BBC Wildlife Magazine, Member of the British Guild of Travel Writers and a Fellow of the International League of Conservation Writers, Proud Ambassador for Leica Birding, London Wildlife Trust, Rare Bird Alert, EcoNoja Feria Internacional and the Colombia Bird Fair, President of The Friends of Suntrap Forest Education Centre, and author of several books including the recently published, How to Be an Urban Birder.