#GivingTuesdayCLE at Beachland Ballroom Raised Over $20,000 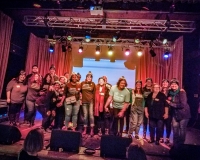 #GivingTuesdayCLE is Cleveland’s grassroots, hyper-local response to a global movement that started in New York in 2012. Now celebrated around the world annually, on the Tuesday after Thanksgiving, the driving belief of Giving Tuesday is that one small act of kindness can inspire another, collectively making our neighborhoods, cities, and the world a better place to live. And thanks to WISH Cleveland’s second-annual #GivingTuesdayCLE city-wide giving campaign, local nonprofits are feeling the love.

Collaborating since mid-summer, an all-volunteer planning committee launched a “wear your good hat” campaign, selling grey and black beanie with a distinct “Do Good” slogan stitched on the front. Proceeds from the sale of hats supported any participating organization and were also available to purchase at community retailers such as Waterloo’s Six Shooter Coffee and Euclid’s The Green House co-working and event venue. #GivingTuesdayCLE partnered with sponsor Anthony Thomas Advertising to film an inspirational video that featured over 30 community leaders sporting their “Good Hats.” It was a warm, trendy and unified approach to fundraising that successfully raised over $21,000 in donations via a custom dogoodcle.org website donated by Euclid-based Good Cause Creative, the writing, and editing firm that also publishes WISH Cleveland.

Every decision was thoughtfully made by the #GivingTuesdayCLE planning committee. Including the opportunity to partner with the historical Beachland Ballroom and Tavern, the “Good Hat” bash was hosted on Tuesday, December 3. According to Pam Turos, event co-chair and owner of Good Cause Creative, “People were so excited when they found that our event would be held at The Beachland. It's an iconic venue, and it meant a lot to our planning committee to be connected with a local business that has been investing in Cleveland for decades,” she explained.

Other Collinwood based organizations that participated in Giving Tuesday include the Neighborhood Pets Outreach and Resource Center, a nonprofit agency with a mission to provide affordable pet care to low-income residents to reduce shelter intake. “Thanks to specific interest and support from Cleveland City Councilman Anthony Hairston & Greater Collinwood Development Corporation we began working out of the Five Pointes Community Center every Saturday, as well as attending community-focused events on the east side. Donations collected through Giving Tuesday will help Neighborhood Pets continue servicing over 2,700 low-income Cleveland pet owners,” said Becca Britton, the program’s Executive Director. The Collinwood Painted Rain Barrel Project, a conservation initiative that has received a list of accolades and awards registered with the campaign as well.

With the belief that we can do more together than we can do alone, WISH Cleveland is empowering Cleveland residents to “give local” in their communities. The “Do Good” carried a vibrant message amplifying that community change starts with us. With the support of students and staff at the Tri-C Mandel Scholars Academy, plans are underway to keep the good vibes going all year long through a #52TuesdaysCLE campaign launched on Tuesday, Dec. 31. To keep up with their weekly generosity challenges, visit wishcleveland.com or follow @wishcleveland on social media.

Rachel is a faith driven wife and momma of two and an aspiring book author. She’s a Euclid resident, Cleveland native, freelance writer and a proud Miami University Alumnus. Go Red Hawks! Rachel loves the outdoors and hosting parties for her loved ones.