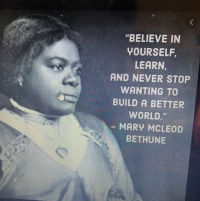 2020 marks the 150th anniversary of the 15th Amendment (1870) which gave the rights to black men to vote after the Civil War. It also marks the centennial of the Nineteeth Amendment and the culmination of the women's suffrage movement.  African American and the vote, recognizes the struggle for voting rights among both black men and women throughout American History.  It is an ongoing conflict for people of color that continues into the 21st century.  Even before the Cicil War, free black men first petitioned state legislatures for the right to vote, but it wasn't until 1870 when the 15th Amendment was ratified providing that "the right to vote shall not be denied or abridged on basis of race, color, or previous condition of servitude."

Black History Month first originated as a part of an initiative by writer and educator Dr. Carter G. Woodson, who launched Negro History Week in 1926. Woodson proclaimEd that Negro History Week should always occur in the second week of Februar, between the birthdays of Frederick Douglass and Abraham Lincoln.

Since 1976, every American President has divulged Februaryas Black History Month.  Today, other countries such as Canada and the United Kingdom also devotes an entire month to celebrating black history.

Here are a few quotes from famous Black American: