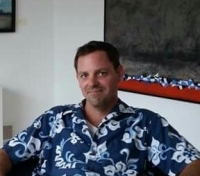 Take a step back, reconsider your perspective - and you might start viewing the world as Guerin Wolf does.It might sound easy, but take a look at Wolf's landscape paintings on their massive canvases and you'll see only a fraction of the work required. Countless hours, weeks and sometimes months are dedicated to altering the viewer's perspective in Wolf's pieces.

Vast skies take control of impressionistic landscapes. Railroad tracks blur into the horizon as the vanishing sun stains the ground crimson. Scenes of the interstate are sparsely dotted with cars headed for destinations unknown.

Wolf's creations breathe with life all their own. It's a style of painting he refers to as "abstracted realism."

As a member of North Collinwood's Article Gallery (15316 Waterloo Road), Wolf is surrounded by other working artists in a collaborative space. Article - owned and managed by Lou and Susan Ross - gives artists dedicated space to work and also display their pieces in a shared gallery in the heart of the Waterloo Arts & Entertainment District.

But getting to the North Collinwood community of artists took Wolf some time.

After growing up in San Francisco, Wolf moved to Cincinnati with his mother and eventually made his way to Columbus to attend Ohio State University. He didn't study art there, though - at least not as a degree. Instead his coursework focused on writing. During his free time he studied the artistic process.

Wolf says he grew up drawing - first with cartoons and caricatures. He even did all the illustrations for a children's book over the course of several years. His experience with illustration and publishing was frustrating, though. He began to experiment with paint as a medium, which served as a natural transition from drawing.

Eventually, life brought Wolf to Fredericksburg, Virginia and the tiny arts community in Stafford County. He painted and painted and just kept painting all the while in the historic battlefield city of Fredericksburg. Wolf continually taught himself the knowledge needed to expand his abilities as an artist: Philosophies of perspective. Substrates to work on. Archival quality production. Technique. Even the best types of paint.

In time he started entering juried shows throughout the region south of Washington D.C. And his work was well received. A majority of his works were displayed in galleries throughout Virginia. He became more involved in the arts scene in the state.

As fate would have it, Wolf wouldn't stay in Virginia. At a point of transition in life, Wolf decided to make the journey back to Ohio, a place and a people that spoke to him of home more than anywhere.

Wolf didn't want to head back to Cincinnati or Columbus. For his move back to Ohio, he decided to head to Cleveland. He'd never imagined living in the post-industrial colossus on the shores of Lake Erie, but as he researched more and more about the city, the more he heard about the thriving community of artists taking up residence and reshaping Cleveland.
His fiancée Maria was here, too. That didn't hurt either.

Wolf first set up shop in the Tower Press Building, but eventually moved out to Lyndhurst with Maria. The search began for a new studio space, and that's when he stumbled upon Article.

Wolf heard more and more about the Waterloo Arts & Entertainment District as he sought his new home as an artist. He wanted a collaborative studio environment, but didn't want something squeaky clean. North Collinwood seemed like a genuine community where artists were not just setting down roots, but also integrating with the community. Eventually he found Lou Ross right in the midst of the Waterloo streets cape.

To date, Wolf has displayed his works across Northeast Ohio - from River Gallery in Rocky River to Elevate Gallery in Slavic Village to a huge street mural during Ingenuity Fest 2015 behind the Rock & Roll Hall of Fame and Museum.

You may have even seen Wolf and the other artists of Article during Kickin' It With Kenny in the wee hours Tuesday, December 13. During the live special, Kenny Crumpton took viewers on a tour of local shopping options in the Waterloo Arts & Entertainment District. Native Cleveland, Six Shooter Coffee, Brick Ceramic + Design Studio and Article Gallery were all featured, along with a host of local artists and business owners.

Several of Wolf's pieces are currently on display in River Gallery, and samples of his work are available on his website and Facebook page. He can be reached by email at guerinw@comcast.net. You can also stop by Article any time Wolf is in the studio working to see his available work or discuss a specific project.