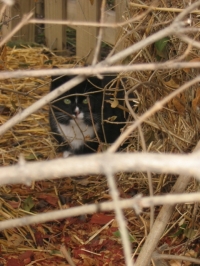 This article is in response to an article submitted by William J. Sanek and published in The Collinwood Observer, page 16 of volume 6 issue 5 June 2014.

The Euclid Beach Feral Cat Project and Waterloo Alley Cat Project both agree wholeheartedly with Mr. Sanek that all cats would be better off living inside a home, but this is an unrealistic solution to solving the feral cat overpopulation that is occuring in every major city accross the country. Cats that are born and raised outside fear humans and are not adoptable. Just as Mr. Sanek points out “cat overpopulation is a human caused tragedy,” HUMANS are also the greatest threat to the survival of wildlife in the United States, NOT cats. Most of the world’s ecosystems are facing multiple threats caused by humans and each new threat places additional stress on our already weakened ecosystems and their wildlife, for example: global warming, habitat loss, oil spills, pesticides, and pollution. There are only a few places left on the planet where the negative affect of humans has not been felt. Humans have exploited and left their footprints on nearly every corner of the globe and are sadly leaving less and less room for wildlife.1

Our TNR groups have never seen a cat with rabies during our 5 years of performing trap-neuter-return (TNR) of over 850 cats in North Collinwood and none of us have suffered from any diseases caused by our handling of numerous cats. There has not been a case of a cat to human transmission of rabies reported in the U.S. for over 35 years and there are more cases of deaths from West Nile Virus than rabies. Wildlife is the number one source of rabies because they are not vaccinated, and rabies can only be transmitted to humans through bites. Since feral cats fear humans, they will run away rather than stay and attack. We should mention that cats are routinely vaccinated for rabies as part of trap-neuter-return programs.

Cats are a natural deterrent to rats and mice just from their scent alone, but spilled bird seed under bird feeders will attract rodents. Although we all love birds, they are disease carriers and cause more illnesses than cats. People continue to unfairly blame cats for carrying disease and killing birds even though it is just as likely to see birds of prey swoop down and kill unsuspecting birds while feeding at a bird feeder. Cats do kill birds, but studies repeatedly demonstrate that cats kill the easiest readily available prey -- most often, small rodents. As fast and cunning as cats are, they can't fly.

Our 2 volunteer groups strive to educate people about feral cats and make the world a better place. We did not create the problem of feral cat overpopulation in North Collinwood, but we are a small group of people trying to solve the problem. Part of our educating includes giving advise to people who don’t want cats their yard and how to humanely discourage their pesence because removing or killing cats doesn’t work. Intentionally killing a cat is a criminal offense in all 50 states and the District of Columbia, regardless of ownership. Anticruelty laws apply to all cats—companion, abandoned, lost, and feral.

The program is called trap-neuter-return (TNR) because we are returning the cats to what they consider their “home” and we continue to care for them which is not re-abandoning. TNR DOES work which is why programs have been implemented in almost every city across the United States and is endorsed by The U.S. Humane Society, Alley Cat Allies, and ASPCA.

Merchant on Waterloo Road: Blue Arrow Records and Books and This Way Out Vintage Shoppe in the Beachland Ballroom and Tavern. And, lover of cats.