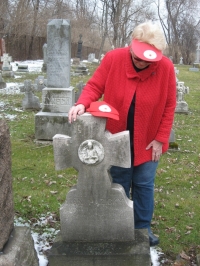 Charlotte Iafeliece places a red cap on the grave of her uncle Johan Pazicky (age 7) who perished in the Collinwood School fire.

One hundred eight years ago this past March 4th, a horrific and inconceivable tragedy shocked the entire village of Collinwood.  On that Ash Wednesday morning, fire engulfed the seven-year-old, three-story Lakeview Elementary School, killing 172 children and 3 adults.

According to the account by local author and resident Edward (Sonny) Kern, “The flames burned through the pine wood floors so quickly that within an hour’s time since the [fire] alarm was given, the school was reduced to nothing but a burned out shell of outer brick walls that encircled and enshrined a basement full of ashes and corpses of children.”

The sadness, sorrow, grief and heartache that touched the lives of survivors’ families, the city, and country then (and for generations afterward), may have now inspired something both positive and uplifting.

A driving force behind this evolution has been Charlotte Iafeliece, long-time Collinwood resident and niece of seven-year-old Johan (John) Pazicky, who was among the fire’s victims.  Almost a year ago, Iafeliece and Elva Brodnick, another Collinwood resident, embarked on a plan to restore and maintain the current Memorial Garden, built to replace the original one that was built on the site of the old school at East 152nd Street and Lucknow Road.

Dubbed The Little Red Cap Project, this community botanical effort is intended to perpetuate the memories of all those who perished.  It takes its name from Johan Pazicky, who initially escaped the burning school building but ran back in to retrieve his little red cap.

Through the collective efforts of The Little Red Cap Project members and a host of other individuals and organizations including, Memorial School and its Garden Angels, Collinwood Nottingham Historical Society, Councilman Mike Polensek, the school district, student workers, and community volunteers, the garden is newly landscaped and ready for this season’s planting.  Hopefully, this month’s April showers will bring red and white geranium flowers to beautify this historic landmark and renew the legacy it reflects.

Gail Greenberg is the media specialist at Collinwood High School.