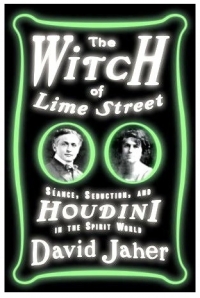 I found a book at the library that I wanted to tell readers about.  The book is The Witch of Lime Street: Séance, Seduction, and Houdini in the Spirit World, by David Jaher.

The book cover design with a photo of Harry Houdini and the subject of “the spirit world” is what first caught my attention.  It is a work fiction about Harry Houdini and how he exposed fraud mediums, but it is based on fact and carefully researched with a vast amount of quotes from Houdini, Sir Arthur Conan Doyle, and many others.

I liked reading about Houdini and his life as an escape artist.  But the really interesting part was learning how Houdini exposed phony mediums who held séances in the 1920’s, when people were desperate to contact their lost relatives who died in the First World War. I did not know anything about this part of history, and found it fascinating to read how these phony mediums held séances in total darkness, and produced strange ectoplasm from their body, and created visions and sounds.

When the Scientific American held a contest to find an authentic medium, Harry Houdini was one of the judges.  Although he judged some of the contests, he also went about exposing phony mediums in their private homes.  He would disguise himself as an old man, and attend séances, then jump up and reveal whatever trickery he found.

One woman, Mrs. Mina Crandon (known as Margery), the wife of a prominent Boston surgeon, was favored by Doyle as the authentic medium who should win the contest, but Houdini thought she was a phony.

Throughout the book, there is a battle of wits between Margery and Houdini, as she tries to prove her authenticity, while Houdini finds strange and suspect evidence at her tests and at her private séances at home, where she channeled her dead brother’s spirit.

The suspicions about Margery are made even more intense when Jaher includes information from newspaper articles that were written about the Crandon’s at that time.  Margery’s past had been investigated, and suspicions that her husband had done surgery on her body, which allowed her to produce the ectoplasm, are mentioned.  The most awful suspicions were the investigations into the missing boys that were adopted by Dr. Crandon.

Although I had a little trouble keeping up with all the researchers’ names, I found the book to flow easily from one chapter to the next, building suspense about séances, investigations, and what Houdini would discover next about Margery.

How Houdini died was something I never knew, and although Jaher does not actually say the word murder, it is implied.

This book is interesting, suspenseful and educational, especially in its authenticity.

And the cover glows in the dark!

Jeanne Coppola is a resident of the Collinwood neighborhood, and is interested in art and writing. She has a Bachelor of Arts Degree from Cleveland State University.