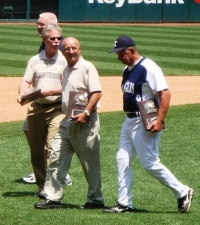 The Legendary Collinwood High School Coach, Bill Kronik, was inducted into the Greater Cleveland Slow Pitch Hall of Fame this October.  Bill is also a member of the Northeast Ohio Baseball Coaches Hall of Fame inducted in 2011.  Mr. Kronik grew up in the St. Jerome's area around E. 149th and Lakeshore Boulevard and is a proud graduate of Collinwood High School and the University of Dayton.

Coach Kronik began his 33 yr. teaching career at John Adams in 1965 before becoming a well-respected member of Collinwood High School’s Teaching and Coaching Staff in 1970, working under Principal Bill Martin.  Mr. Kronik was an assistant football coach from 1970 through 1973 and became Collinwood’s Head Baseball Coach in 1970.  Moving forward in his career, he was named Collinwood’s Athletic Director in 1980.  He worked tirelessly during his tenure for his kids and the school, often giving up his own time to help a student in need or to personally make sure the schools concession stand was stocked for home basketball games by shopping himself for refreshments.

Bill has been a Supervisor for the Neighborhood Leadership Institute/Schools as Neighborhood Resources, for over 20 years and he worked 3 nights per week overseeing a school-community initiative partially funded by Councilman Mike Polensek, at Collinwood High School, which included recreation and enrichment programs for all ages.  Councilman Polensek, who's known Coach Kronik throughout the years stated, "Bill Kronik demonstrated time and time again that he cared for all the students as Collinwood High School.  Bill symbolizes commitment and concern, and only reinforces the old saying, ‘Once a Railroader, always a Railroader.’”

We wish Bill the best in all his future endeavors.  Congratulations from the Greater Collinwood community!