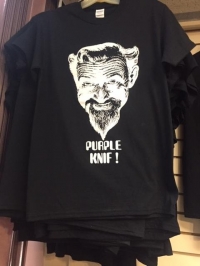 Born in 1949, Ronald Sweed was the only child of Robert and Irene Sweed, growing up at 1964 Idlehurst Drive. In 1963 he and some friends would attend a showing of "Dr Silkini and his Frankenstein Show" at a local theater. A combination of live act with skits and showing of old monster movies much in the style of local Ernie Anderson's Ghoulardi Show on WJW TV-8 that Ron enjoyed.  In the alley after the show they found a pitched trunk with a gorilla suit in it. He wound up taking the suit and wearing it home. In July of that year he'd heard Anderson would be attending Euclid Beach Park's Coca-Cola Day to do a promotional appearance. Sweed decided to show up in the gorilla suit where after Anderson having seen him got him up on stage and incorporated him as part of his act. Soon afterwards Anderson took him on as an intern helping with bits and other chores with the show. At age 14, misusing his station's credentials, he was able to meet the Beatles at a press conference held at their downtown hotel prior to their concert at Municipal Stadium. The Ghoulardi Show ran from 1961 to 1966 when Anderson left for Los Angeles finding a lucrative career doing voice over work. The slot and format of the show would continue as Houlihan and Big Chuck, who had worked with Anderson on the show with Sweed continuing on as an intern.

Sweed would continue working, graduating from Euclid High in 1967 and going on to attend Bowling Green University. In 1970 he would approach Ernie Anderson about reviving his character for television. Anderson gave his blessings so long as he changed the character's name, hence becoming the Ghoul. Working now with Channel 61, Kaiser Broadcasting, The Ghoul Show was lauched in March of 1971. It would also be broadcast in different markets across the country, but did not catch on so much with the exception of Detroit. The show ran till January of 1975. He passed away ironically on April 1st this year of a heart attack at the age of 70. Ghoulardi and the Ghoul attracted the pseudo rebellious male teen outsider, bridging the era's of Greasers and Beatniks, Hippies, then Punks. A friend, Ted Zbozien, who used to live at Beulah Park, has created something similar but in a darker vain with a ventriloquist dummy named "The Doctor" at his website videopsychotherapy.com. Looking back at the old clips of the Ghoul on YouTube, some's pretty hard to watch. But then again it was almost 50 years ago and we were kids.

I only met the Ghoul once. It was around Halloween in the mid 1970's and I was in my early teens. Mom agreed to drop off a buddy of mine and myself off at the Hudson Haunted House where the Ghoul was making a promotional appearance. We had brought him a model to blow up during his show, which was part of his routine. Sitting at a table he was dressed in his regular show attire of a big brown furry hat, sunglasses with one lens missing, moustache, goatee, and a blue lab coat with a bunch of buttons. There was a line to meet him, and I remember briefly meeting and giving him the model we'd built and receiving an autographed card with a caricature drawing of his head in character. There was also a hot babe scantily dressed standing beside him. It was good to be a kid that cool fall evening.

We were coming of age. Too old for Captain Penny and Jungle Larry, Barnaby and Woodrow the Woodsman, but not yet sneaking cigarettes or beers from our fathers basement refigerators. Moving on from comic books from the newsstand to Mad Magazine. During the school year it was all about Saturday nights when we were allowed to stay up late, have sleep overs with sleeping bags, having cheap delivered pizzas and cokes while playingcards or boardgames in front of the television and or listening to the radio. At eleven o'clock it was the Ghoul with his "B" horror or monster movies from the fifties that he'd dub over at certain points and have skits at commercials. Dumb jokes revolving around Parma, white socks, plastic pink flamingos, Cheese Whiz, and kielbasa. His foil was a rubber frog named Froggy who'd drop down from overhead and who he would abuse when he wasn't blowing up something with firecrackers or cherry bombs. The sound tracks were "Pappa-Oom-Mow-Mow" by the Rivingtons, "Surfin' Bird" by the Trashmen, "Who Stole the Keeshka?" by Collinwood's own Frankie Yankovic, or the funky instrumental beat of "Frankenstein" by The Edgar Winter Group.

Dinner during the week for my brothers and I would be at the breakfast room table with dad at the head and a small black and white screen television on the other. Watching Walter Cronkite or Dorothy Fuldheim trying to make sense of the world with Vietnam dragging on, inner cities burning, and the economic boom we had enjoyed since World War II was beginning to tank. On September 19th 1977 was neighboring Youngstown's Black Monday when the steel mills closed putting some 5,000 out of work. My gang and I were too young to understand any of it. All we needed back then was our comradery and a laugh.