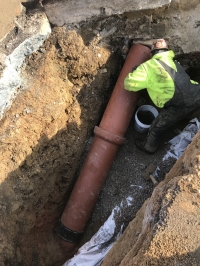 Work is progressing on theEast 185 Street and Marcella Road Relief Sewer Project that will help reduce street and basement flooding during heavy rains. The project will continue through summer and it is scheduled to be completed by the end of the year.

Micro-tunneling will continue for several more weeks. Micro-tunneling is not loud, but causes vibrations felt above ground. Traffic on East 185 Street will remain limited to a single northbound lane while the southbound lane is closed between East Park and Pawnee avenues. For the next few weeks, the northbound traffic lane will shift slightly while a water main is being relocated.

Since work began on the project last July, Cleveland Water Pollution Control (WPC) has worked closely with the contractors, the Regional Transit Authority (RTA), utilities and several city departments to minimize inconveniences. WPC, its contractor and Councilman Michael Polensek also have participated in several community meetings to keep residents and business owners informed and to address concerns. Regular postings by WPC on Twitter and Facebook also keep project information before the public.

Traffic and access to businesses are two areas of concern for property owners and Polensek. Closures have been limited to the immediate areas of the construction, which in this case had many fenced-in work zones at Marcella Road and East Park and Pawnee avenues.

“We acknowledge construction zones and detours can be disruptive, but our goal from the beginning has been to minimize negative impacts and ensure safety for motorists and pedestrians,” WPC Commissioner Rachid Zoghaib said of the $15 million project. He explained that micro-tunneling option was selected over the traditional open cut method to minimize road closures and other disruptions.