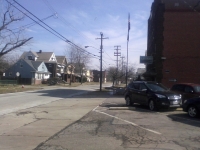 Holmes Avenue looking East.  The Slovenian Home is on the right.

While North Shore Collinwood is getting the media attention these days, the Collinwood-Nottingham Village neighborhood is also a community trying to reinvent itself.   According to Mary Louise Daley, this was the second most important industrial area in the city,  “Any company in Cleveland you can think of got started in Collinwood,”   Not only that, the Five Points area, the intersection of St. Clair and East 152nd St., was a major commercial area.  Like for many Cleveland neighborhoods, the past five decades have been a challenge but things are now looking up; as I discovered while recently driving down Holmes Avenue.

The streets off of Holmes Avenue are a mirror image of the ones along East 152nd Street north of I-90.  There are mainly rows of duplexes built before World War I lining the streets; many look run down, some still vacant though many others have been demolished.  Here and there you find an old store or vacant lot where structures once were. The imposing edifice of St. Mary of the Assumption Catholic Church (also known as St. Mary’s Collinwood) serves as witness to what it used to be.   Like in many Cleveland neighborhoods the parishioners moved on but the churches remain.

To the north is the former Collinwood Rail Yards, one of the main engines for the area’s growth a century ago.  Closed in 1981 (though the CSX intermodal facility still operates on part of the site), part of the site has since been redeveloped being the location for, among other things, a social security office, the Greater Cleveland Food Bank and the headquarters of Jergen’s Inc.  Just South of Holmes on East 152nd St is the headquarters of the 5th District Police which covers not only Collinwood but all of Northeast Cleveland as far as East 55th St.

There is no doubt that this place has seen better days.  However, according to Councilman Michael D. Polensek a few projects are in the works that can truly be beneficial in the long run.  For example, the pastor of St. Mary’s, Father John Kumse, is buying up vacant properties for urban agriculture.  In fact, on East 156, he is creating something that was quite common in the area 120 years ago; a vineyard.  At one time Collinwood and Nottingham were major centers for table grape production.  Even Ferrante Winery, now located in Ashtabula County, had its’ start there so Father Kumse is merely reviving something quite commonplace there. He’s not the only one to do so. Collinwood Grape Company located on Mandalay Avenue is also assembling property to create a winery with a stone chalet.

Urban Garden District Legislation, passed by Cleveland City Council in 2007, has encouraged to conversion of thousands of vacant properties into community gardens and, lately, urban farms such as Ohio City Farm (covering 6 acres in Ohio City) or the Chateau  Hough Vineyard on the East Side.  Subsequent legislation passed in 2009 has opened the door to raising small livestock (or “Chicken and Bees” ordinance) which has opened the way to what is going on around Holmes Avenue.

Meanwhile, at the corner of east 156th St. and Saranac, there is an effort by the Center for Advanced Mental Health Practice (CAMHP) along with the Collinwood Catholic Ministries to open up an urban grocery store.  Located in a former existing grocery store, it will specialize in produce from the community gardens of the area.  According to CAMHP’s Danielle Dronet, this is planned as a self-sustaining operation that “Will create local jobs and we hope to move into a bigger production of our goods,” which would be sold not only to local residents, but area restaurants and even online. They plan to produce food that “looks like something you would want to eat” from the community gardens, being it strawberries for homemade jams to tea produced from proposed greenhouses.  One of the ideas Ms. Dronet mentioned was to grow lavender bushes, to “blanket the area” she put it, in many of the still vacant lots, including along Holmes Avenue.  Not only would it be a cost effective way to beautify the area, but the flowers can be cultivated for use is in soaps, essential oils and other commercial purposes.  A five year business plan has been submitted and they met with City of Cleveland officials on March 7th.

One consequence of all this is the fact that the crime rate around Holmes Avenue has plunged.

Like its’ more publicized neighbor to the North, Collinwood-Nottingham Village, and Holmes Avenue, still is trying to figure out a way to be a better place.  It will be interesting to see what happens in the years ahead.