Gotta Catch Them All

by Brian A Friedman 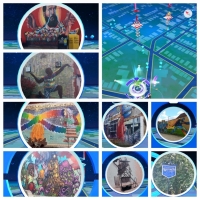 By now, you have probably heard about the new mobile gaming craze called Pokemon Go that is sweeping the nation. In short summary, this new, free phone app allows users to capture various animals and monsters (Pokemon) by walking around. When these Pokemon pop up, players use a variety of items to capture these Pokemon to add to their individual rosters. These items are not infinite and need to be replenished at various locations called Pokestops. In addition, coins to buy these items can be earned by having control over Gym locations. All of the Gyms and Pokestops are scattered and are somehow tied to various points of interest that were already populated when the game launched.

So, what does this have to do with the artists' movement in Collinwood? Well, those points of interest are all over the neighborhood but really focused on the Waterloo Arts & Entertainment District.   Waterloo regulars have probably noticed a huge increase in the number of people wandering the street phone in hand. These people are either battling at one of our THREE gyms or collecting items from the ELEVEN Pokestops. How did we get so lucky to have all of the Pokemon Go happening? There are a lot of people to thank. Thanks go to Beachland Ballroom, Waterloo Arts and Slovenian Workmen's Home for being awesome enough to each deserve to be a Pokemon Go Gym. But those eleven PokeStops? Most (but not all) are tied to the street art program called Zoetic Walls which is curated by Waterloo Arts. Yet one more great reason to call Waterloo the most awesome place in Northeast Ohio. Our importance in Pokemon Go was even covered by Cleveland.com in this story.