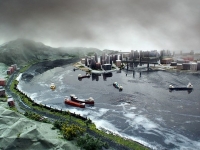 While growing up, Lori Kella was torn between becoming an engineer or an artist: these days she's a bit of both.

Kella teaches at Kent State University, covering a range of photography techniques with her students. But in her personal work, she gets to imagine and build her own scenes before capturing them with her camera.

At an early age, Kella enjoyed the way a camera rendered images, but she didn't find that the world presented the precise scenes she wanted to convey with her camera. She could see the stories of the natural world around her, but the camera didn't quite capture everything.

Kella built her own scenes. They started as still life images with fruit and vegetables from the nearby food co-op. But as her work evolved, her created landscapes became something surreal - teeming with their own reflection of reality that just couldn't be captured by going out and photographing nature.

She wasn't sure of the legitimacy of her process, though. Building sets and photographing them? That seemed like it would be sacrilegious in the photography field - a field that can tend toward an ethics of purity.

Kella ultimately settled on getting a degree in photography from the Cleveland Institute of Art.

While there, Kella's view of photography was revolutionized as professors showed her that the approach to her work was completely legitimate. There were even multiple art forms being utilized in her works: diorama, portraiture, model building, crafting and scenic design.

After her undergraduate study, Kella worked as a medical photographer at University Hospitals - marrying her love of science with art. All the meanwhile she continued to hone her personal works with a fusion of making and photography to craft narratives of science, nature, history and community.

A graduate degree from Cornell University and several years living in New York later, Kella moved back to Northeast Ohio with her then-partner (now husband) Michael Loderstedt, interim director for the School of Art at Kent State University.

There they settled on the shores of Lake Erie in North Collinwood (initially because of Loderstedt's love for sailing, but ultimately because of the sense of community, natural resources and affordability that the neighborhood offered).

In her recent work, Kella has explored the western United States, ocean liners crossing the Pacific and even the humble camping trip. Her most recent body of work, "Seven Summits," is part of the Scale 3 exhibit at Cleveland Print Room (2550 Superior Avenue) through September 23.

Kella is also one of nine finalists in Northeast Shores Development Corporation's Ballot Box Project. Her project Grow. Cook. Eat. Collinwood connects neighborhood gardeners and cooks in order to create and share recipes that promote eating healthy and locally. Neighbors are sharing their favorite seasonal recipes (using local produce) that will be featured online and in a community cookbook.

While Kella's current work with the Ballot Box Project might not let her create dioramas of the tallest mountains across the globe, it lets her utilize photography to do what she loves most: build community.

Keep an eye out for the launch of the Grow.Cook.Eat.Collinwood cookbook this fall during the November Walk All Over Waterloo, or check out some of the recipes already posted online.

If you have a recipe to submit or garden you would like photographed, reach out to Lori Kella through the Grow.Cook.Eat. Collinwood online form. For a look at her portfolio of work, visit her personal website. And be sure to see her current works in the Cleveland Print Room before the show is finished.