LaSalle Arts and Media Center Project is Ready for Construction 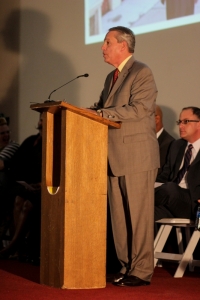 The long awaited LaSalle Arts and Media Center project had a groundbreaking on August 9, 2016. Several dignitaries and project supporters were on hand to officially launch the commencement of the project.

The venue will be the largest venue on the east side of non-hotel associated rentable event space. Given the unique floorplan levels, capacity for table seating will be from 250 to 600 people. “The adaptable re-use of the LaSalle Arts and Media Center sets the stage for a number of creative events to be hosted. We also hope to be able to show some films once or twice a month,” stated Executive Director Brian Friedman, Executive Director of Northeast Shores Development Corporation the projects manager. Data will have the potential to travel into and out of the premises via fiber optic cable supplied by Lightower Communications. Five apartments will be rehabilitated utilizing The City of Cleveland Housing Trust Fund HOME Program, supplying 5 affordable housing units to the project. Three commercial storefronts will house: a bakery, insurance office and artists gallery space.

The project will continue as planned with what the public discussed at the project charrette in 2010. The wide open theater auditorium will remain in its 7,000 + square foot of unobstructed view state and will host events with A Taste of Excellence being the exclusive cater for the venue. The calendar will be filled with a number of ancillary uses, neighborhood meetings, parties, as well as performance space.