Get Out and Vote 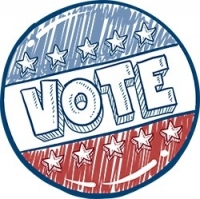 Do you have 14 minutes to spare? Of course you do! That's perfect because that's how long it takes the typical person to vote.

Everyone knows this year is the presidential election, but there are also a lot of other really important things to vote for. On the ballot you'll also see candidates for US and Ohio House and Senate, State Supreme Court, local courts, and more.

When you vote, you are sharing your voice; letting elected officials know what is important to you in your community. House and Senate members make the laws, and the courts enforce those laws. Education, prison reform, reproductive health, businesses, and agriculture are just a few of the topics your vote will influence. By voting, elected officials are more interested in your thoughts because when you like what they do, they keep their job.

Don't forget!If you moved, you need to change your address.

YOU CAN VOTE if: you're 18 by November 8th, live in Ohio, are a US citizen, and not in jail for a felony.