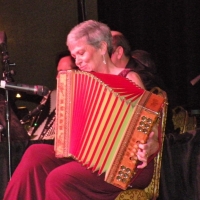 Collinwood entertainer Kathy Hlad perfomed after she was inducted into the National Cleveland-Style Polka Hall of Fame, Saturday, November 25, at the Downtown Cleveland Marriott Hotel.

Kathy Hlad, the Collinwood accordionist and instructor, was one of three musicians to be inducted into the National Cleveland-Style Polka Hall of Fame at a gala stage show at the 30th annual Polka Music Awards Show. She was joined on stage at the Cleveland Downtown Marriott Hotel Ballroom with two other lifetime  inductees, bandleaders Stan Blout and Frank Stanger, on Saturday, November 25, 2017.

Other winners were from the Cleveland area: Ron Likovic for button accordionist; Patty C and the Guys for button accordion ensemble; Dave Skrajner for vocalist; the SNPJ Recreation Grounds for Culture and Heritage; and the Fred Ziwich Orchestra for Album of the Year for the band’s “40th Anniversary Recording.”

The eight-piece Awards Show stage orchestra was led by Tom Mroczka with orchestrations by 23-year-old musician Aaron Dussing. The show was directed by Ray Somich and Denny Bucar and produced and written by Joe Valencic, President of the Polka Hall of Fame. The Tony Petkovsek Awards was presented by the founder of the Thanksgiving Polka Weekend to Jan Horvath and Vice President Mark Habat, chairman of the three-day event. Each guest received a 64-page souvenir program book.

The Thanksgiving Polka Weekend brought 22 polka bands and five busloads of fans from the U.S. and Canada to Cleveland, Ohio, for the three-day music festival. Nearly 700 room-nights were booked at the Marriott. Forty-eight musicians appeared on the main stage in the traditional jam session on Friday evening. The Polka Mass was celebrated by Fr. Frank Perkovich of Minnesota. Jam sessions extended into the night.

"If you love to dance, this is the place to be,” said Chantal Brutovsky of Binghamton, New York. “That’s why my husband and I come every year.”

For information and photos on the 2017 Thanksgiving Polka Party Weekend and Awards Show, check www.polkafame.com or the National Cleveland-Style Polka Hall of Fame page on Facebook. DVD recordings of the 2017 Awards Show can be ordered from the Polka Hall of Fame at (216) 261-FAME. The museum is at 605 East 222nd Street in Euclid, Ohio, and is open Tuesday, Wednesday, Friday and Saturday from 11 to 4. ###

Joe Valencic is a North Collinwood resident and President of the National Cleveland-Style Polka Hall of Fame and Museum.