Oliver H. Perry students get with the times 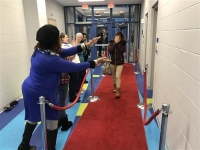 Students from Oliver H. Perry PreK-8 School moved just across the property to a new building on Jan. 24.

But the upgrade advanced their educational environment by nearly a century. The school they left behind dated to 1927.

“That really was an old building with old problems,” media specialist Virginia Weedon said. “The media center was boiling hot. Sometimes you had to open a window in the freezing cold, and it was hard to get the window down again.”

Students had waited and watched the construction next door for months, then a weather-related closing pushed back the move-in date another 24 hours.

Jaden, an eighth-grader who has attended Oliver H. Perry since kindergarten, described coming to the new building as “a relief.” The first child through the door, a kindergartner named Makiyah, was awed by what she saw.

The building, located on Schenely Avenue near East 185th Street, is part of CMSD’s ongoing modernization program. Since 2002, the District has built or fully renovated more than 40 schools with state funds and local bond issues approved by voters.

Every classroom in the Collinwood neighborhood’s new school has a 75-inch interactive touch screen equipped with apps and software.

Each of the three floors has a common area where students can work together in teams. A project lab will serve as a traditional science lab, but students also will use it for computer coding and robotics and have access to “maker space” materials.

The new building also has a sensory room, for students with special needs, and a large gymnasium. Furniture is comfortable and can be easily rearranged for individual or group work.

The cafeteria will operate as a café, with third- through fifth-graders acting as hosts or hostesses and soothing music playing. Booths will be reserved as places of honor for “Soaring Eagles,” students picked monthly for attributes such as honesty, respectfulness, creative thinking and innovation.

Principal Brittani Irvin and teachers introduced students to the new building and had them write questions that centered on how it would operate.

Irvin said that the students will need some time to settle in.

“They have spent a long time in a really old space that does not exhibit any of the things they see in the world in terms of technology,” she said.

Students are not the only ones who face an adjustment period.

Preschool teacher Carmen Lyles has worked for the District for 28 years, including 12 years at Oliver H. Perry. She said the move may affect her timetable for retirement.

“I’ve always been in older buildings; now I get to experience a new building on my way out,” she said. “I don’t know, I may stay another five years. I might like it that much.”